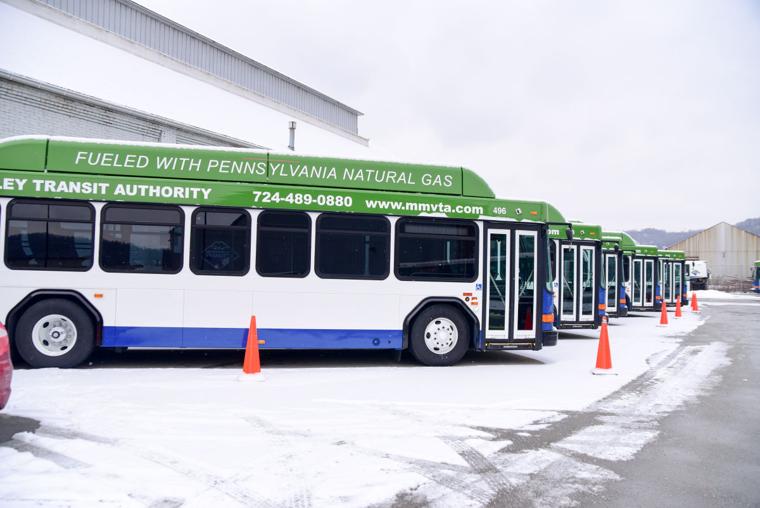 When eight new “green” transit buses hit the road today, they were nearly five years in the works.

The Mid Mon Valley Transit Authority was among several authorities which piggybacked on to a mass bid started by Red Rose, a Lancaster-based transit authority, said Donna Weckoski, executive director of the MMVTA.

The buses were finally ordered mid-2014.

The eight CNG buses replace four, 40-foot commuter buses which service the Valley to Pittsburgh routes, and four, 35-foot local service buses. The buses were purchased from Gillig LLC, a California-based manufacturer, which has delivered buses to the authority in the past.

Every vehicle in the fleet is handicapped accessible, including a hydraulic lift ramp.

“We eliminated the back door for more seating,” Weckoski said.

Each is a “kneeling” bus, meaning the stairs at the front door lower to street level for easy access.

The buses were purchased with 80 percent federal funding and 16.66 percent in state grants, Weckoski said. The bulk of the local funding came from Westmoreland County.

The CNG-run buses is a sign of the federal government’s move toward more environmentally sound “green” vehicles. Weckoski said

In addition, the transit authority is eligible to receive a $125,000 federal Clean Air green grant.

Weckoski said the authority hopes to tap into a Peoples Natural Gas CNG pipeline in the Donora Industrial Park by mid-February. In the meantime, compressed natural gas will be delivered from Bentleyville.

Each bus was installed with six fuels which store CNG. Because the fuel is compressed at several thousand pounds, the CNG-fueled buses can run all day on it, rather than requiring refueling every one to two hours like traditionally fueled vehicles.

The transit authority operates a fleet of 30 buses.

The buses typically have a lifespan of 12 years or 500,000 miles, said Parham. Some buses in the transit authority’s fleet, though, have amassed more than 600,000 miles.

“We will replace six more buses within two years,” Weckoski said. “Eventually, all of our buses will be CNG.”